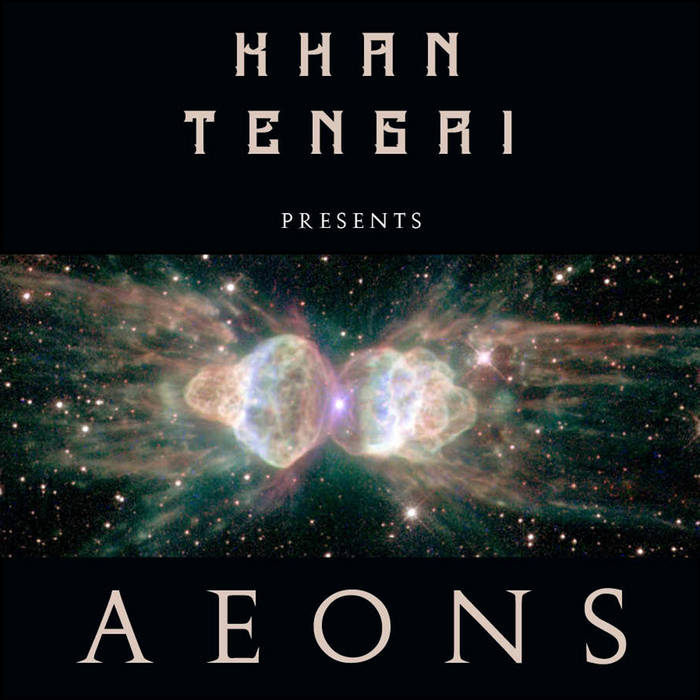 KHAN TENGRI makes psychedelic space rock in a corner of Canada’s northern wilderness. AEONS is unified by the loose concept of vast gulfs of cosmic time, expressed through the medium of kosmische, celestial psychedelia, and progressive rock. The aim of this music is both to enlighten and to frighten, containing as it does a sonic interpretation of H.P. Lovecraft’s classic horror novella, At the Mountains of Madness; an angry condemnation of human-created extinction; a tribute to Maitreya, the Future Buddha; a love song from one tiny, insignificant life to another; and a hard-rock Zen exhortation to drop off body and mind.

This recording is dedicated in memoriam to Daevid Allen, who might have enjoyed some of the music.

REVIEWS:
"This album wonderfully allows your imagination to roam freely to other galaxies, planets and even here on earth in a full on prog presentation of sight and sound … I think that you will agree when you hear it that it has many different facets of the prog genre held within it’s walls as you journey through the tracks, absorbing it all in and playing it a second time, because it’s one of those albums that just grabs you and sits you down and says listen to this!"
—Progressively So
progressivelyso.wordpress.com/2016/04/09/canadian-zen-from-beautiful-north-bay-with-khan-tengri/

"'Aeons' is a lush collection of songs that have beauty, substance and a vision rooted in a Zen like calm. What Thompson has done so cleverly is take his work as The Gateless Gate; the glacial beauty and kosmische ambience, and has used it as a base for some psychedelic meanderings and musings. It works on so many levels - whether you just want to listen to it....or LISTEN to it - and the messages contained are laudable and holistic. A stunning piece of work."
-Dayz of Purple and Orange
dayzofpurpleandorange.blogspot.ca/2016/04/review-khan-tengri-aeons.html

"Aeons is a really cool listen; it works well as a space rock album but it also shines in its more ambient parts. There's some striking guitar work and much to enjoy on an album that is equal parts chilling and dazzling."
-Atom Heart Mutha
atomheartmutha.blogspot.ca/2016/04/album-reviewkhan-tengri-aeons.html

"it is so psychedelic that soon without any outside help (well, some caffeine) I immediately felt totally stoned myself (well, in The Shining Sea rather eerily beautiful )!"
-Music Over My Head (translated [poorly] from Hungarian)
breakthesilence.blog.hu/2016/04/08/khan_tengri_aeons_ajanlo

Some drums and drum samples supplied by Tim Timleck